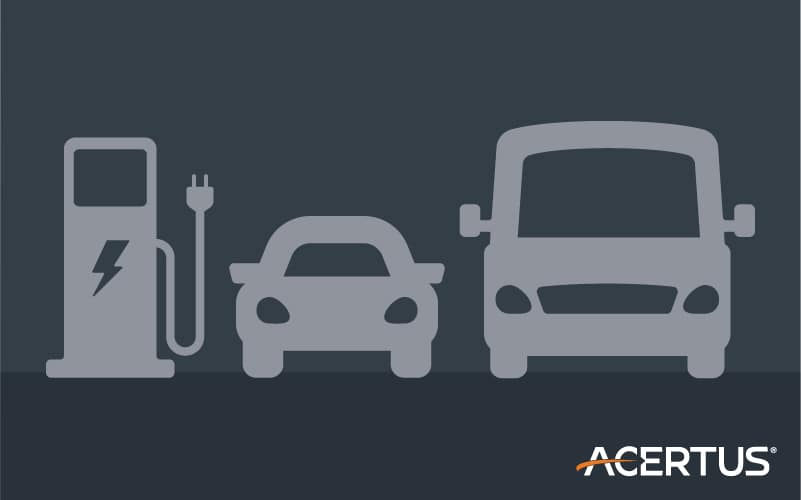 The rise of electric vehicles is one of the hottest topics right now – both in the automotive industry and the larger mainstream discourse. Because things seem to be changing on an almost daily basis when it comes to these vehicles and the trends surrounding them, the team at ACERTUS has broken down the “who, what, where” of electric cars, as well as what the auto industry should expect in the near future.

It’s hard to turn on the news, read the paper or do a simple Google search without seeing something about electric vehicles. Recently, Ford announced it would build $11.4 billion worth of mega campuses, solely for electric-car production, while General Motor’s electric-commercial vehicle unit BrightDrop shifted to van production and expanded its overall lineup.

Many businesses are starting to convert their fleet units to be electric, and Amazon-backed electric vehicle company Rivian experienced enough success to file to go public back in August 2021. Already, the state of California and GM have announced heavy-duty plans to sell only zero-emissions new vehicles by 2035. With states and automakers making announcements like this, analysts project that electric vehicles could make up one quarter of all new sales by that same date – which would mean 13 percent of all vehicles on the road would be electric by that time.

One of the biggest reasons behind the push for electric vehicles, particularly in the United States, is pressure from the federal government to hit clean-energy goals. The Biden administration has a goal of achieving net-zero emissions by the year 2050. There’s even  an electric-vehicle trade-in program being discussed in Congress currently, where consumers would trade in vouchers to exchange their traditional gas-powered cars for zero-emissions vehicles like electric cars.

Add to all this the fact that US automakers like Ford and GM have made big announcements recently in terms of their electric-vehicle production, and that amounts to a reality where competition is now ramping up among more traditional OEMs to be able to achieve similar goals.

Back in December 2020, Consumer Reports conducted a survey and found that younger drivers are more likely to buy electric vehicles than older ones. While 40% of all drivers reported having interest in one day buying an electric vehicle, that number went up to 78% when it came to millennial drivers. Additionally, more than 70% of those surveyed said they agreed that electric vehicles would reduce climate or air pollution and that automakers should offer other vehicle types (like plug-in electric pickups and SUVs) alongside the current electric-car models. Overall, the Consumer Reports survey concluded that “public perception of EVs is inching toward the mainstream.”

While more people are adopting electric-powered vehicles in many different states across the US, according to a report by the American Council for an Energy-Efficient Economy (ACEEE), the state of California is leading the way in terms of having the highest number of electric-vehicle adopters and being the most electric vehicle-friendly with charging stations, electrification incentives and more. Other states who are paving the way include New York, Washington D.C., Maryland, Massachusetts, Washington, Vermont, Colorado, Oregon and New Jersey.

Although many of the most electric vehicle-friendly states hover along the coasts or major metropolitan areas, the highest-scoring Midwestern state in the report was Minnesota, and Virginia led the Southeast.

In a separate report from the Department of Energy’s Alternative Fuels Data Center (AFDC), the top five states for the most electric vehicle registrations are actually California, Washington, New York, Texas and Florida – which is interesting because three out of five of those (Washington, Texas and Florida) currently have no zero-emissions mandates.

This past August, the Biden administration set a goal of hitting 50% electric vehicle sales by 2030, part of its larger plan to achieve net-zero emissions by the year 2050. While companies like Tesla and Rivian have been selling all-electric vehicles for many years now, Consumer Reports notes that many traditional OEMs are now planning to ramp up their electric-vehicle production.

Globally, electric vehicle sales have surged, with growth in all three of the top automotive markets – the US, China and Europe. On top of that, earlier this year, the International Energy Agency (IEA) released predictions that global electric-vehicle numbers are set to hit 145 million by the end of the decade.

How ACERTUS Can Help with Electric Vehicles  If you’re looking to convert your fleet to more electric vehicles but you have questions about what that means for transportation and other vehicle logistics, a partnership with the team at ACERTUS can help. Already, auto-transport company ACERTUS is making investments in electric-vehicle charging infrastructure – both equipment that is stationary and those chargers that can be used on the go – so its drivers and carriers can successfully complete transports and keep operations moving.

In addition to vehicle-transport service for these units, ACERTUS has the expertise to help with compliance services for electric vehicles. Even though many states are still working to determine what will be their exact compliance requirements for electric vehicles, particularly when it comes to the International Fuel Tax Agreement (IFTA), ACERTUS is already helping the companies it works with accomplish the services they need to and get prepared for those electric-vehicle compliance needs that will be forthcoming.

Beyond all of this, the ACERTUS team can also assist with title and registration, telematics and storage services for electric vehicles of all shapes and sizes – as well as for hybrid vehicles, gas-powered cars, alternative-fuel vehicles and everything in between.

Learn more about ACERTUS’ services for electric vehicles, including its full range of vehicle-shipping and automotive-logistics solutions, at https://acertusdelivers.com. To connect with one of our team members or receive a quote, contact us here or call us at this phone number: 855-ACERTUS (855-223-7887).

Top 4 Ways to Extend the Lifecycle of Your Fleet

How to Maximize Tax Exemptions for Your Fleet in 2022